The Marshall University Joan C. Edwards School of Medicine was founded in the late 1970s with the mission of both providing care for West Virginia as well as creating and supporting a pipeline of physicians to serve the state’s largely rural populations for decades to come.

Constructed with $4.5 million in federal funding secured by Byrd, the Center for Rural Health serves as the base for Marshall's rural medicine outreach programs, which directly affect more than half of West Virginia's counties. As a tribute to the Senator role in securing funding for the center, the Robert C. Byrd Center for Rural Health at Marshall University was named in his honor.

The center features a modern learning technology center used to support rural providers, a 210-seat auditorium, teleconferencing center, a health sciences library and administrative offices of the School of Medicine. 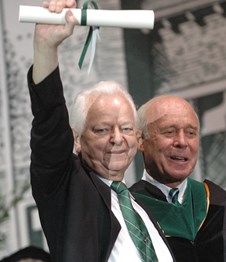